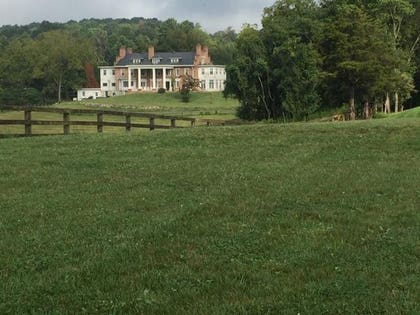 If you think that big old houses have to be notorious money pits, you have not met Cliff DeVito and Chris Walker. At Forest Oaks, their magnificent brick manor house in Natural Bridge, Virginia, they not only love their home’s historic architecture, they make a living from it.

“It is very doable,” DeVito says. “We did it right, and it is totally working for us.”

However, he goes on to explain, doing it right involved a lot of research, as well as a lot of negotiation, time and patience.

The original house was built in 1806 by Matthew Houston, whose cousin Sam Houston famously ended up in Texas. Houston called the house Vine Forest, but since a tavern and a dry-goods store operated from the front room, it came to be known as Forest Tavern. Houston added on in 1812, installing a barrel-vaulted ceiling to echo the shape of the Natural Bridge, a local landmark just down the road.

That is how the house remained until 1916, when Curtis Walton and his Aunt Lily came from Cleveland. They bought what was still a Federal house, and transformed it into their fantasy of an English country estate. They added a solarium and a billiard room, one at each end, and more bedrooms, enlarging the house into a 32-room mansion. Their most dramatic renovation was the installation of an oak Jacobean staircase that likely came from an English manor.

Nearly a century later, Cliff DeVito and Chris Walker were living in Arizona, but actively looking for a house they could operate as an inn.

“We had three criteria,” DeVito explains. “We wanted a historic house, a property with an agricultural component and a location near an attraction.”

“And, we wanted to be somewhere green,” Walker adds. “We were tired of living where it’s always brown.”

When they found the property now called Forest Oaks, it was listed at $1.7 million. They learned that a bank was owed money on a reverse mortgage acquired by the previous owners.

That purchase price bought them an 11,000 square foot house, three cottages built on the property in 1916, stables and 45 acres of land overlooking the James River and the Blue Ridge.

“That price made it possible for us to make some improvements,” Walker says. “The house was sound, but we had to install upgraded systems.”

For financing, Walker and DeVito turned to the Conservation Fund, a non-profit that seeks to foster environmental preservation and economic development.

“We partnered with them for our financing: they will take risks that banks won’t. It has been what made it all possible.”

Today, Forest Oaks provides income from a variety of sources. As B&B owners, DeVito and Walker have bookings into 2022; these short-term rentals earn them over $165,000 annually. They rent their fields to local farmers and allow local arborists to harvest windfalls and branches overhanging the house.

“Some of that doesn’t earn us very much money, but we barter for agricultural goods and services while the property is being maintained,” says Walker.

Forest Oaks has become a popular wedding destination; event rentals bring in about $33,000 a year. Walker and DeVito recently opened an antiques shop in the basement and they are establishing a bakery to serve guests as well as restaurants in nearby Lexington, VA. Added up, their various revenue streams produce an annual income of just under $270,000.

“From the beginning, we knew that we had to come up with a multi-faceted approach,” DeVito says. “We will do murder mystery weekends and catered wine pairing dinners; whatever we see a demand for.”

They have seen a demand for Forest Oaks-branded merchandise, so they have launched a collection of sweatshirts and fleece garments embroidered with the name of the house. It’s just one more way Forest Oaks is providing for them