The energy trade is burning up.

The energy ETF (XLE) just posted its biggest monthly gain since 2015, buoyed by oil’s bestJanuary since 1983.

Frank Cappelleri, chief market technician at Instinet, said that kind of advance could fuel an even bigger crude rally which may spill over into energy stocks.

“Crude oil is up about 20 percent for the month which is kind of rare. It’s only happened 11 other times since 1983,” Cappelleri said Thursday on CNBC’s “Trading Nation.” “At the same time, it’s been up the following month seven times.”

One energy name in particular piques Cappelleri’s interest, and it’s about to report earnings.

“Chevron looks pretty interesting,” he said. “Recently it’s formed a cup-and-handle pattern over a couple of years. We think that can play out.”

A cup-and-handle formation is seen when a downswing then upswing forms a “cup,” followed by a period of consolidation which tends to move the stock downward. Typically, that period precedes a move higher.

“Also, [it is] outperforming Exxon since the beginning of 2016, so we think that this can continue, another positive, which is why we like Chevron here,” said Cappelleri. 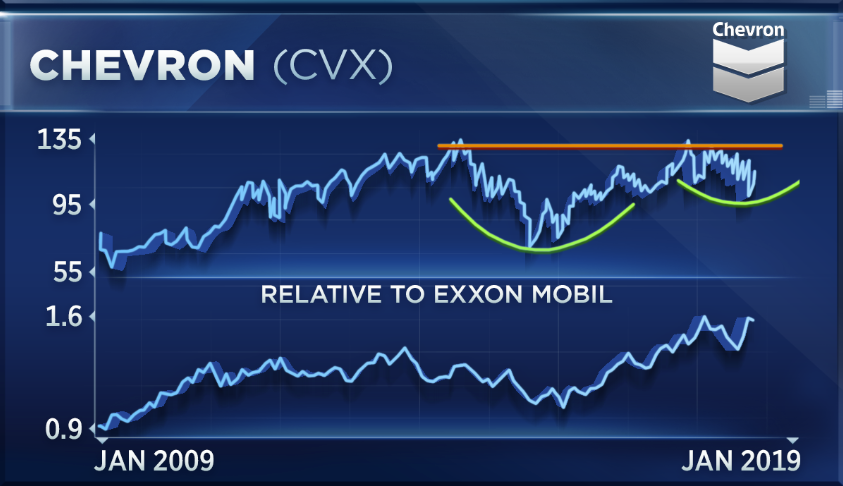 Exxon Mobil and Chevron are scheduled to report earnings before the bell Friday. Both of those stocks look like a buy to Erin Gibbs, portfolio manager at S&P Global.

“A lot of the energy stocks still look good both from a valuation and dividend yield perspective and we like both of these, even though fundamentally they’re very different,” Gibbs said Thursday on “Trading Nation.” “They’re part of that whole value play and actually value has been keeping up and actually slightly outpacing the broader market.”

Both Exxon and Chevron trade at around 15 times forward earnings, in line with the S&P 500‘s valuation. Their dividend yields are far higher than the majority, though: Exxon yields 4.5 percent, while Chevron yields 4.2 percent.

“We like both of these and would say get them ahead of their earnings,” Gibbs added.

The average American scored an ‘F’ on this investing quiz—see how you do
In college, Elon Musk thought these 5 things would change the world
Unemployment is falling. But it may be short-lived: ‘There’s no cause for celebration’
Elon Musk Called Jeff Bezos What?! + Nikola and Tesla Update! June 30th,2020
Inside a $10,000,000 Custom Hollywood Home with UNDERGROUND TV