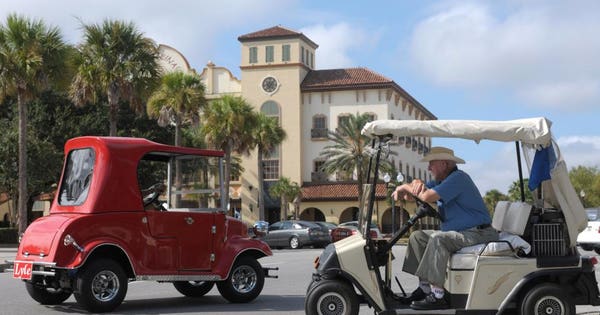 William LeBeau, 86, right, sits in his golf cart in a parking spot at the main square in The Villages, Fla. (AP Photo/Phelan M. Ebenhack, File)ASSOCIATED PRESS

The Villages, 62 miles from Florida’s Walt Disney World Resort, is a town-sized retirement community known to its residents as the “Disney World for old people.” Few in the town are younger than 55, and more than half of the baby-boomer residents dot around on golf carts; not just on golf courses, but everywhere: to the supermarket, to the doctor’s, to the golf-cart-only gas station.⁠ The Villages is veined with 100 miles of  “golf cart paths,” separate from the road network.

Nancy and Neil Borden, right, chat before heading home in their golf cart, a replica of a 1934 Ford, in The Villages, Fla., (AP Photo/Peter Cosgrove)ASSOCIATED PRESS

The golf carts – some of which are customized to look like Model Ts, fire trucks, or Thunderbirds rescue-vehicles – tootle along at low speeds. Precious few of the 110,000 (mostly white) seniors in town ride bicycles: where motoring is easy, even if the motoring is on golf-cart paths, Americans drive.⁠

Why golf carts? Because of the golf. The community has 33 nine-hole courses.

There are similar golf-cart-dependent communities elsewhere in the United States, such as Sun City, Arizona, and Peachtree City, south of Atlanta, Georgia, which has 11,000 golf carts for 13,000 households, but The Villages – often said to be one of the fastest-growing small cities in America – has 55,000 golf carts.

Some of them are even used for sexual frolics. The Villages “comes alive at night with bars and nightclubs, and where aging Senior couples are routinely found having open sex in the streets of the community,” reports one salacious news report, adding that “golf carts are usually the vehicle of choice when it comes to sex.”

An article in Buzzfeed agreed: “Free, consensual, noncommittal sex with a new partner every night is an option.”

Fiberglass replica of a 1934 Ford, sports bug-eyed headlights, chrome hubcaps and iridescent flames across the jet black hood in The Villages, Fla. In this master-planned land of golf greens, polo fields, and gated cul-de-sacs, the snowbirds are excited by fancy golf carts. (AP Photo/William Perry)ASSOCIATED PRESS

The Villages was master-planned by Harold Schwartz and business partner H. Gary Morse – their families still control the community. A predominately Republican place, The Villages is almost always an election stop for presidential and vice-presidential hopefuls  – old ’uns don’t only like their golf carts, and Viagra, they also like to vote.

Sustainable funds are outperforming their peers during the pandemic, BNP Paribas says
YOUR MONEY IS IN DANGER | HOW TO PREPARE
The Dow will fall back to coronavirus crash level below 19,000 before new high: CFO survey
What they are, how they work
Stock Market Crash Coming June 2020?!