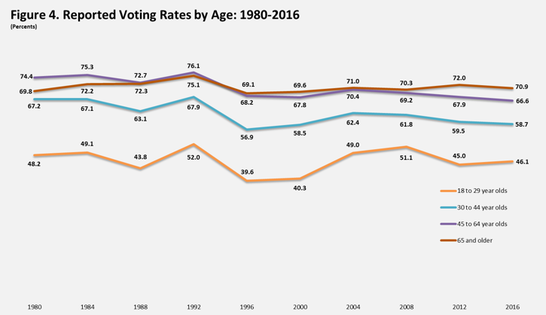 Voters by Ages from the Census Department

A recent poll is bad news for Biden (76), Sanders (77), and even Trump (72) and very bad news in progress towards stamping out age-bigotry. More voters in a poll don’t want someone over 75 compared to other factors like being black, or gay, or a woman…or even a Muslim. Being a “socialist” is the most undesirable characteristic listed.

The NBC/WSJ poll tested 11 different presidential characteristics and there acceptability as a person who is President. The most popular: An African American (a combined 87 percent of all voters say they are “enthusiastic” or “comfortable” with that characteristic), a white man (86 percent), a woman (84 percent), and someone who is gay or lesbian (68 percent — up from 43 percent in 2006).  The least popular:  a Muslim (49 percent are enthusiastic or comfortable–up from 32 percent in 2015), someone over the age of 75 (37 percent) and a socialist (25 percent).” Those polled may be overstating their tolerance for African Americans and women, they don’t want to look bad to the pollster. But saying being over 75 is an undesirable characteristic is not viewed as bigotry and an act of discriminatory prejudgment is notable.

As I wrote in March, why do many Americans view prejudgment based on age legitimate? We don’t see widespread public arguments that Kamala Harris and Cory Booker too black to run? And Elizabeth Warren, Amy Klobuchar, and Kirsten Gillibrand too female to run? Every hire (and an election is a hiring decision) is a judgement about the potential productivity of a candidate. The relevant questions in every hire is whether a candidate will be engaged and competent for the job at hand? Does the candidate have the knowledge and talent to do the work?

The harm of age discrimination on the campaign trail is trivial to the widespread pain and damage which lies beneath the ageism. Though illegal, age discrimination in employment, pay, training and promotion, persists. Ageism makes older workers struggle to get raises and jobs. A recent study indicates employer bias against older workers and muddies the issue about whether someon over 75 is too old to work. A majority of employers surveyed by Transamerica Center for Retirement Studies answered that age 64 was too old to be considered for employment (this was the median age given by employers, though most refused to give an age – wisely, since it’s against the law to consider age in hiring and promotion and pay). On the other hand, the median age that workers gave was too old to work was 75. The workers’ answer still makes it complicated for the candidates over age 75.

Wh0 is too old to be President?

I am an expert in labor economics and the economics of aging. The range of opinions from my colleagues who are professionals in the field fascinates me. History professor, James Chappel at Duke and English Professor, Sari Edelstein, of University of Massachusetts, Boston wrote last week in the Washington Post that no one is too old to be president. They argued firmly that older people are varied, much more healthy than in the past, and are falsely viewed as having cognitive decline that affects their real world capacity (measured by a WWW score) to do a job in the real world. Modern cognitive tests of capacity show many times that older people do not significantly differ in their overall WWW score and some older people performing as well as or better than most younger people.

Chappel and Edelstein report disapprovingly on comedic poop jokes directed at Bernie Sanders, age 77, the insult and bigotry masquerading as a “joke”  is that Senator Sanders is sponsored by Metamucil and was present for the signing of the American Constitution.

My colleagues are divided. One writes, and I will report their comments anonymously because they were privately made on a listserve: “At some point something is a risk and a greater risk for some demographic categories than for others.  As any insurance company could tell you.  So it’s reasonable to worry about Biden,without making that a determining factor.”

Another wrote, “Age can also be associated with experience and wisdom and perspective.” Another wrote that so-called signs of aging could be just an ageless characteristic of someone. It is just “Biden-Being-Biden.”

The experts seem to be about split evenly between those fighting back against the ageism and defense of it. Here is a defense, “But suggesting that someone who would be well into his ninth decade if he served two terms is too old to run for president is not ageism.” This comment was met by a practical response, “The obvious solution, as it always is with candidates of any age, is to make sure there’s a good succession in place (i.e., a proper VP pick). It certainly isn’t to avoid elevating an otherwise good or preferable candidate because of what might happen in the future — cause’, well, it’s the future.”

The author of Ending Ageism, or How Not to Shoot Old people, sums up the ageism debate with common sense. She argues the rigors of campaigning is a good qualification screen and the bottom line qualifications of a President. “Weathering a presidential campaign proves the contestant has far better health and stamina than anyone of any age who hasn’t done it. A presidential candidate should be judged on verbal agility, reasoning power, historical knowledge, and vision of the common good.”

How America’s Retirement Dream Became a Nightmare
You might have to prove your identity to get Michigan tax refund
Charlie Munger warns there are ‘lots of troubles coming’ because of ‘too much wretched excess’
Tesla prices its secondary offering at $767 a share to raise $2 billion
Samsung’s $1,400 smartphones: What’s up with the new sky-high pricing?