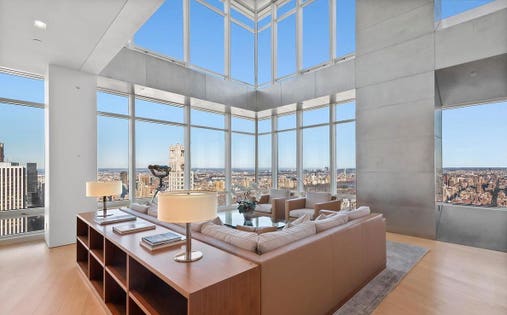 In the competition for vertical space, the windows won this round. Artwork will have to be happy with the other condo billionaires Steve and Alexandra Cohen have on the market (Steve Cohen made his fortune via the hedge fund route with a Forbes estimate of his net worth at $12.8 billion, making him #101 on the Forbes‘ Billionaires List). That West Village condo is asking $33.5 million and as the photos show is designed to house their impressive collection with works by Willem de Kooning, Jeff Koons, Jasper Johns, Picasso and Andy Warhol. This Midtown condo on the other hand, forgoes white wall space in favor of sunlight. This four-bedroom duplex in the One Beacon building is asking $45 million, after a few price reductions down from $115 million back in 2013.

All the residences at One Beacon begin on the 32nd floor, rising up to the 55th floor where this 9,000 square foot penthouse resides. There are five other condos for sale in the building, ranging from a $26 million 3-bed, 5-bath to a $7 million 2-bed, 2-bath. There are also three units for rent, including one of the penthouses asking $60,000 per month. The unit the Cohen’s have listed is designed by architect Charles Gwathmey which you can see in the symmetry that shows up when mullions match the same proportions as the wall of bookshelves and industrial necessities such as stone columns and steel beams become a seamless part of the design.

The second-floor office seen below has one of the best vantage points in the unit.

The double height living room gives a good idea of how the industrial pieces become part of the design.

The kitchen relies on sleek stainless steel and those countertops are made of honed black absolute granite (it’s hard to see in the photo). The breakfast table uses the same design trick as the dining room where it has a ceiling inset to add some definition to the space.

Here’s a close up of the dining room with that oval inset in the ceiling which makes the wide open space have slightly more defined presence.

The master bedroom is a large, but simple affair. With corner views unobstructed by anything for miles.

Here’s one of the cozier seating areas, with the a clock set in the ceiling.

You might have to prove your identity to get Michigan tax refund
#SiliconValleySoWhite: Black Facebook and Google employees speak out on big tech racism
12 weird but useful beauty products that people swear by
‘Dean of valuation’ says Tesla would need VW-like sales and Apple-like margins to justify stock
The 5 best Amazon deals you can get this Friday