It seems Amazon can’t be stopped.

The stock just posted its seventh straight week of gains — its longest weekly winning streak in a decade — and the stock chart just formed a “golden cross” pattern, which could signal more gains.

Used by technicians, a golden cross is when the stock’s short-term moving average, such as the 50-day, crosses above its longer-term moving average like the widely followed 200-day moving average. This is typically seen as a bullish indicator since there’s demand to the upside, which in turn could be an indication that investors believe the stock is poised to break out. 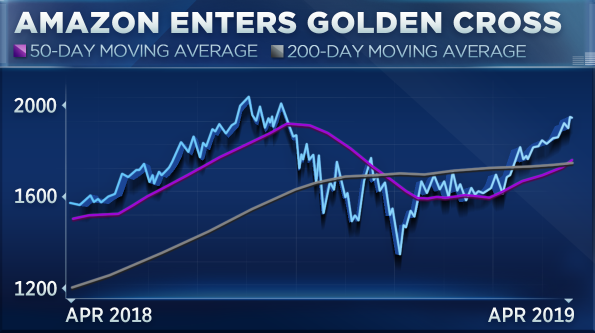 Oppenheimer’s Ari Wald says the chart’s pattern is “confirmation” of his belief that a favorable macro backdrop will lead to continued demand and outperformance for shares of Amazon.

“We continue to expect a premium is going to get placed on these higher growth companies in this low growth world, and this includes Amazon,” Wald said Monday on CNBC’s “Trading Nation” segment. “In general, growth outperformance has been correlated to a flattening yield curve, and generally I think these late cycle conditions are a tailwind for continued leadership,” he added.

Shares of Amazon have gained nearly 30% this year, but at $1,938 a share the stock is still about 5% from its $2,050 intraday all-time high from September. Wald argues that the stock might soon reach, and then top its prior high.

“The stock is breaking above a six-month base. … We’re also seeing a positive inflection in its weekly MACD [moving average convergence divergence] which is coming out of negative territory for the first time since 2014, so we think the long-term uptrend is resuming. Speaking in terms of levels, the breakout at $1,800 is now support and with the resumption of this uptrend we’re thinking break out above that $2,050 resistance that was the peak from 2018. “

The moving average convergence-divergence is a technical indicator that chart watchers use to help anticipate changes in a stock’s path. 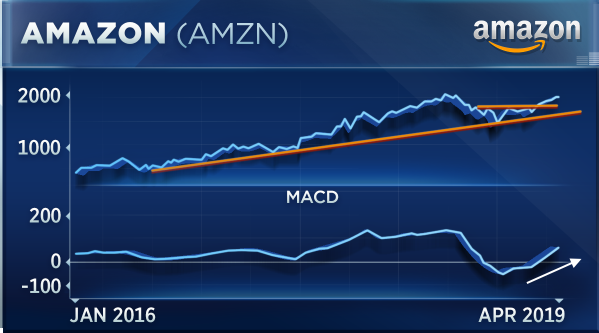 But Point View Wealth Management’s John Petrides says that cooling growth in the company’s “cash cow” AWS business could hit the bottom line and lead to muted gains ahead.

In the first quarter, Amazon Web Services revenue did grow 41%, but Petrides noted that this was a slowdown from the “45 – 50% where that division [had] been trending over the past several years.”

Amazon Web Services is so instrumental, according to Petrides, because the cash it generates allows the company to make forays into other segments of business.

“AWS is a cash cow. That’s the business segment that gives [Jeff] Bezos the firepower to go out and try all these other experiments like buying Whole Foods or same-day or next day delivery, which is costly. So by that cash flowing to the bottom line by AWS, it allows Amazon to do everything else. And I don’t think the market is pricing in that law of large numbers could be creeping up on AWS, and if that growth slows down you could see the valuation come out of this stock and Amazon could fall,” he said.