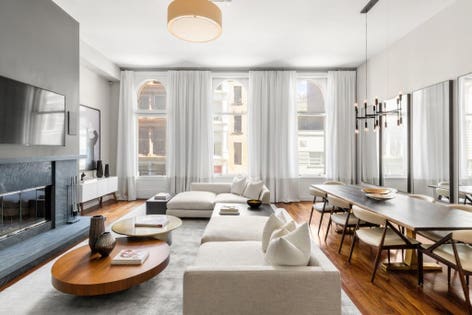 Bethenny Frankel is selling her SoHo condo for $4.375 million.

There are several opportunities to live like a celebrity in New York City this spring. Bethenny Frankel, for example, has listed her SoHo condo for sale once again.

The Real Housewives star and Skinnygirl Cocktails founder bought the two-bed, 2½ bath in a cast-iron loft building at 22 Mercer St. in SoHo, built in 1910, for $4.2 million in 2014 and tried to sell it for $5.25 million in 2017. She then took it off the market for renovations, and is reportedly hoping a price cut to $4.375 million will do the trick.

The apartment features a walk-in closet, an open-air atrium adjacent to the master bathroom and a balcony.

The apartment, listed through Compass agent Leonard Steinberg, has a host of amenities including a walk-in closet, an open-air atrium adjacent to the master bathroom and a balcony.

In other showbiz real estate news, a duplex penthouse at 320 Central Park West formerly owned by Barbra Streisand, in addition to Broadway songwriter Lorenz Hart several years prior, is on the market for $11.25 million.

The co-op, listed through Fox Residential, is located inside a 1930 building on the Upper West Side. Its four bedrooms and 3½ baths are sprawled across 3,670 square feet of interior space, with 10- to 12-foot ceilings throughout.

It has 2,500 square feet of terraces and a library.

Other features include wood-burning fireplaces, a 450-bottle wine closet, a library and 2,500 square feet of terraces.

For those with an even bigger desire to live among the rich and famous, a condo in the star-studded Superior Ink at 400 W. 12th St. in the West Village is newly listed through Carlton Residential for $2.75 million.

A condo in the star-studded Superior Ink is on the market for $2.75 million.

The interiors for the one-bed, one-bath are from the luxury design firm Interior Marketing Group (IMG) and include 10-foot ceilings, hardwood floors and a marble bathroom with heated floors. Its over-sized, sound-proof windows provide sunlight all day long from an eastern exposure.

The development is home to celebrities like Kings of Leon member Caleb Followill and his wife, Victoria Secret model Lily Aldridge.

The complex, designed by famed architect Robert A. M. Stern, has a slew of A-listers on its roster, including Hilary Swank, who owns the $31.5 million penthouse, Kings of Leon member Caleb Followill and his wife, Victoria Secret model Lily Aldridge, along with NASCAR’s Jimmie Johnson. Superior Ink is also home to Marc Jacobs’ custom townhouse, which he is selling for $15.995 million after opting to relocate to a Frank Lloyd Wright mansion in Westchester.

From Nantucket to Martha’s Vineyard: Island hopping in New England the easy way
Tesla prices its secondary offering at $767 a share to raise $2 billion
Balance Your Own Books With Help From These Courses
Samsung’s $1,400 smartphones: What’s up with the new sky-high pricing?
Newspaper chain McClatchy files Chapter 11 bankruptcy after pension woes, print declines