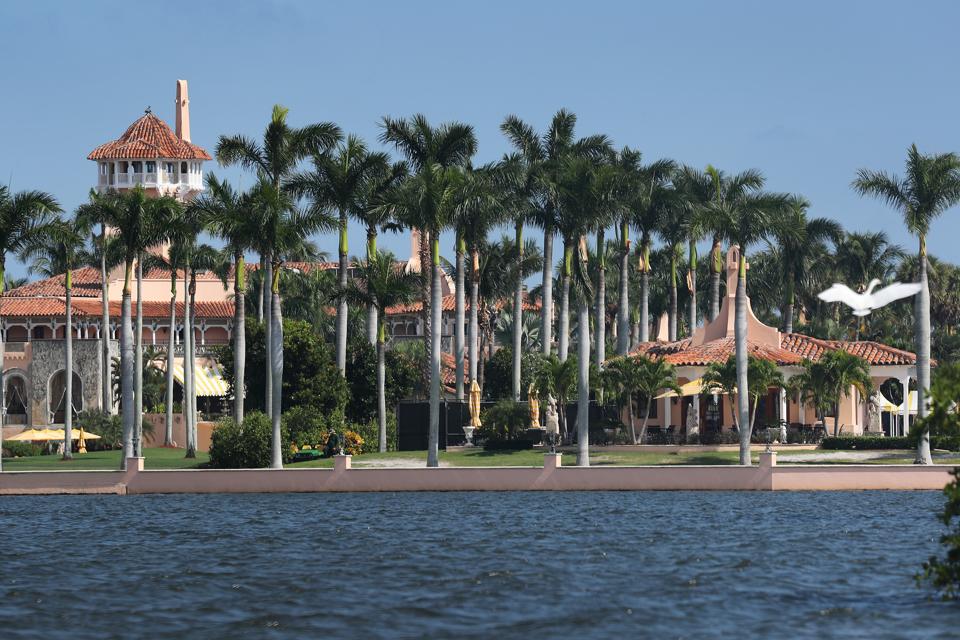 If you live in Florida, whether you think he’s a hero or a rump

Your newest neighbor will soon be Donald Trump!

When she drives by and you are out mowing your lawnia.

Should be in Florida, and not Trinidad and Tobago.

Florida became a state in 1845

And since then has not had a President as a resident while alive.

Florida adopted the law of Great Britain as of July 1, 1776

And now we can only wonder…what will happen next.

One of my friends with strong intuition

Believes the real purpose is to get Barron in-state tuition.

The Gun ownership rate in New York is very restrictive at 10.3 percent

Any legally owned gun can be brought to Florida without state registration or special consent.

But the transition to Florida should be quite easy.

In D.C. there are alligators lurking where you romp

But in Florida, we mostly keep them in the swamp.

My parents didn’t want to move to Florida, but they turned sixty and that’s the law. – Jerry Seinfeld

A great many people in the tax and estate planning community are speculating as to why Donald Trump may be moving to Florida.

There are many advantages to a Florida residency, most notably the avoidance of a state income tax. Residents of New York and New York City are subject to both state and city income taxes presently imposed at the 8.82% (minimum being 4%) and 3.876% (minimum being 2.907%) rates respectively.

A Floridian pays federal income tax at the 37% bracket once he has reached $510,300 of taxable income if single or $612,350 if married, filing jointly. Comparatively, the combined tax rate including federal, state and city income taxes for a New York City resident with the same level of income will be 49.696%.

The above would assume that Donald Trump has a positive income.

If he has taxable losses, which is often the case for real estate investors because of depreciation and other write-offs, then there would be no tax savings.

In addition, Donald Trump may have “C-corporations” which are companies that are taxed at their own brackets.

The 2017 Tax Reform Act reduced the corporate tax rate from a high of 35% to a flat rate of 21% payable to the federal government.

Generally speaking, Florida imposes a 5.5% income tax on C-corporations (this rate was reduced to 4.458% effective January 1, 2019 and reverts back to the 5.5% on January 1, 2022) , and this is deductible on the federal return so that the actual combined rate, taking the deduction into account, is 26.5%.

In comparison, New York imposes a tax rate on C-corporations ranging from 4.425% to 9%. New York source income earned by a C-corporation will still be subject to these taxes.

Florida imposes no tax whatsoever on individual income, or on income that a Floridian receives from ownership in S-corporations, entities taxed as partnerships, pension distributions, or otherwise.

As the result of this, Donald Trump will not have to file income tax returns with the State of New York that discloses all of this information.

From a tax standpoint, New York will attempt to impose income tax unless or until a person has proven a change of residency by clear and convincing evidence. The State of New York conducts residency audits. These audits serve to determine whether or not a taxpayer is a New York State resident, a nonresident, or a part-year resident in order to determine the taxpayer’s tax obligation to the state. The burden of proof is on the taxpayer to prove that he/she is not a New York resident. The New York State Department of Taxation will consider the following five factors to determine residency:

If Donald Trump spends most of his time in Washington, D.C., but significant time in Florida, then New York may be hard pressed to claim that he and his companies are still headquartered in New York, particularly if he and his corporate executive officers are rarely in New York and do not do business in offices there.

Florida has unlimited protection from creditors for a homestead, even if the home is purchased or the debt on the property is paid down shortly before or after a judgment is entered into against the owner.

The homestead exemption applies to an unlimited amount of value, and up to 160 acres of real estate and improvements thereon, if the property is located outside of the city limits of any municipality (up to 5 acres if within a municipality).

For example, if Mar-a-Lago were outside of the city limits of Palm Beach (if it was located within the county but not within a city), then creditors of Donald Trump would not be able to reach the property if it is titled to him personally as long as he resides there.

The Florida case law has confirmed that an individual can be considered to be a resident of Florida for the homestead protection rules even though he spends most of his time and most nights somewhere else, as long as the arrangement is temporary and he plans to come to Florida. Serving as President of the United States should be a sufficient reason to show that he is temporarily away from his intended permanent homestead of Florida.

Notwithstanding the above, there is an exception to homestead protection in Florida. If Donald Trump does not own the homestead in his name for at least 1,215 days before filing bankruptcy, or he does not actually live in the home for at least 730 days before filing bankruptcy or being forced into bankruptcy, then the home will be lost in bankruptcy. Further, if he makes a transfer of monies or assets for the purpose of avoiding creditors, which would include a transfer of the Mar-a-Lago property from Mar-A-Lago Club, Inc. (its present owner) to a different entity, then this would be considered a transfer to avoid creditors and could be set aside by the bankruptcy court if the bankruptcy occurs within 10 years of when the transfer to avoid the creditor occurred.

A good many business people and investors move to Florida when they may become insolvent or otherwise have judgments against them from creditors, which can include banks.

It generally takes three creditors to force an individual into bankruptcy, assuming that the person has at least 12 legitimate creditors.

If Donald Trump only owes money to one or two banks and has 11 or 12 other creditors that are happy with him, then he would not be forced into bankruptcy and could retain the Mar-a-Lago home. He might give a lien and mortgage on the Mar-a-Lago property to a “friendly creditor” that would give him a line of credit and receive all of the income from Mar-a-Lago so that he would be able to live off of the line of credit.

The homestead protection described above would not apply whether inside or outside of bankruptcy if Donald Trump owes money to the IRS, the Federal Trade Commission, the SEC, or as restitution for a crime.

Another tax reason to leave New York would be to avoid New York estate taxes.

On Donald Trump’s death, assets that pass to Melania Trump or to a trust that must pay her all income for her lifetime (with there being no other beneficiaries during her lifetime) will not be subject to New York or federal estate taxes, but to the extent that he leaves assets directly to the children, or into trusts for the children that are not required to pay all income to Melania, there will be a federal estate tax to the extent that his estate exceeds $11,400,000 in value (this rises with inflation and will be $11,580,000 next year), assuming that he has never made large gifts other than to charity.

Quite likely, Donald Trump has made large gifts in the past, whether reported or not, which could mean that he has no estate tax exemption left, so the first dollar that he leaves upon death other than to Melania Trump (or an irrevocable trust that pays her all income) will be subject to the 40% estate tax.

This is exacerbated if Donald Trump dies as a resident of New York because New York’s estate tax. Even if he has not made any large gifts and his full estate tax exemption amount is still intact, he would be subject to New York estate tax on 100% of his estate. The current New York exemption amount is $5,740,000, and estates exceeding that amount by more than 5% are subject to estate taxes on 100% of their value. The estate tax rate ranges from 3.06% to 16% with any amount over $10,100,000 being taxed at 16%.

Considering how much money Donald Trump claims that he is worth, the part of his estate not going to Melania Trump would likely incur an overall New York estate tax of close to 16% if he died as a New York resident.

New York also recognizes the marital deduction for amounts that pass to Melania Trump or to a trust that pays all income to her.

Donald Trump’s decision to change his residency in Florida is not rocket science to those who understand the world of tax breaks. This will be an interesting scenario to watch unfold because the State of New York may not let him go without a fight.

Charts and information similar to the above are available in my book Florida Law for Tax, Business and Financial Planning Advisors which is available on Amazon.