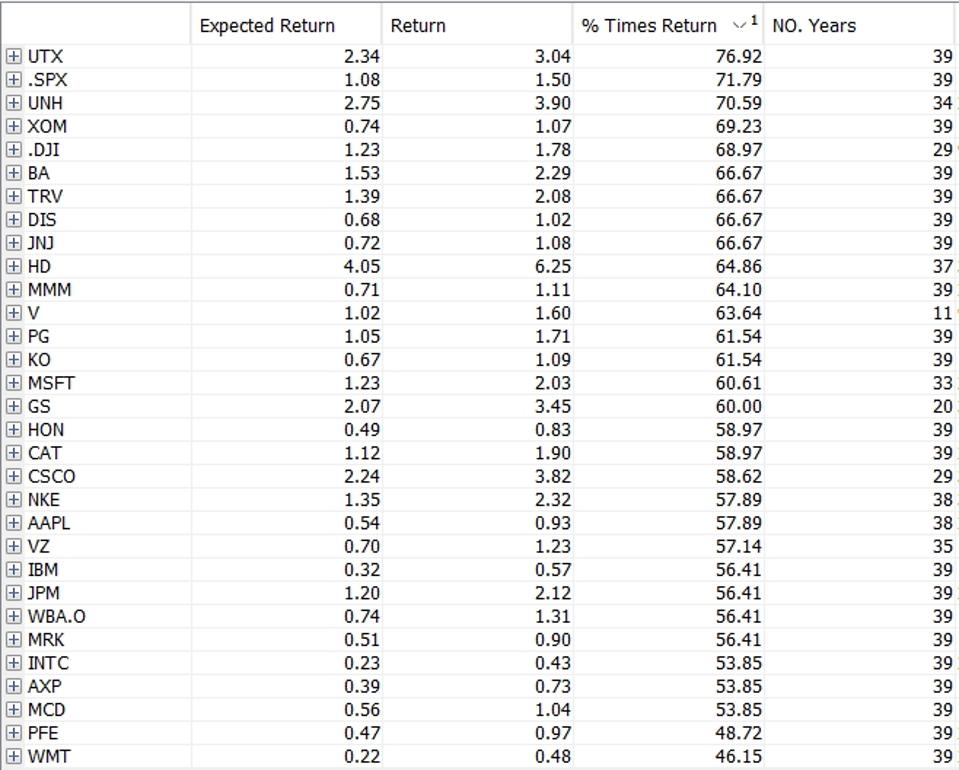 The third posting in this series, Stocks To Trade In October, appeared on September 23rd.

Cycles are of two types, static and dynamic. A static cycle is a rhythm that remains relatively unchanged, such as the tendency for the broad averages to rally in the spring, correct in the autumn and to rally in the last quarter. This approach can be applied to individual stocks. In October, Apple had risen over 70% of the time since 1980. If the weekly dynamic cycle also rises in October, the likelihood of a higher share price is close to 80%. The two-cycle combination raises the probability of success. Indeed, Apple was recommended and did rise 11.07%, the second-best performer in the Dow in October.

The seasonal screen for the month is presented below. The number of years of data is in the last column. The % Times Return column shows the percent of months in which the stock rose. The Return column shows the average percentage gain in the month. The Expected Return column is the product of columns two and three. We can see that United Technologies has been trading for 39 years and has risen in 76.92% of all Decembers. The average return has been 3.04% and the expected return is 2.34%.

Of the top 15, these stocks show rising weekly dynamic cycles for at least 21 days in December and are considered buys for the month:

Regarding the weakest 15, these stocks show declining weekly cycles and are suitable short sales:

I add that the monthly cycle for the overall market does rise in December, so the longs are favored in such a scenario. We will measure the success of this strategy in the next posting for the month of January in about four weeks.

Wirecard Collapse Freezes Millions Of Online Bank Accounts: Will Customers Ever Get Their Money Back?
Billionaires are spending more on political contributions, here are the three biggest spenders
Got an inherited retirement account and took a mandatory withdrawal? You can put it back
Retailers Must Meet Consumers At The Intersection Of Safety And Convenience
Homeownership? The Regulations Crushing The American Dream