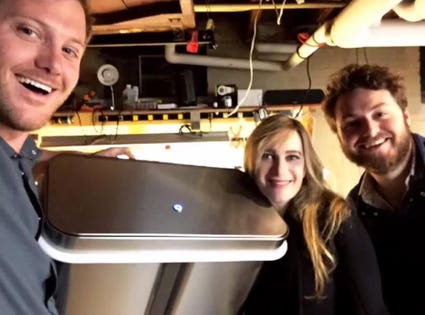 Nestled deep within a wooded enclave off Silicon Valley’s fabled Sand Hill Road lies the offices of Grishin Robotics, a venture capital firm that funds Series A startups seeking to connect bits to atoms and mesh the physical and digital world.

True to their thesis, their portfolio includes some of the most exciting brands in the consumer tech space. Early backers of home security platform Ring and WiFi router Eero (both acquired by Amazon) and electric scooter Spin (acquired by Ford), their investments also include the sidewalk delivery robots of Starship Technologies, the pizza robots of Zume, the pet food robots of Petnet, and the Star Wars robot BB-8 from Sphero.

Since hardware is hard to get right, each month Grishin Robotics hosts an intimate gathering of founders and funders who share origin stories and coach pre-seed hopefuls on their funding pitches.

DoorDash, the $12.6 billion consumer delivery platform, got its start in the dorms of Stanford University when its founders were given a class project to create delivery assignment algorithms for local businesses, explained Tang. In the Summer of 2013 they were selected for Y Combinator and five years later became a unicorn. Much of their success has been credited to their AI-powered logistics engine.

Today, DoorDash is working to automate the last mile of delivery with Cruise Automation and has just launched a program called DoorDash Kitchens which provides pop up shops and market data to chains like The Halal Guys seeking to tune their menus for new markets.

The other unicorn in the room was Impossible Foods which took CES 2019 by storm winning numerous Best of Tech awards from the top trades, an impressive feat considering the innovation was in meat, an industry which hasn’t seen disruption in 10,000 years, explained Konrad. A former Tesla executive and AP journalist, she talked about how the climate crisis drew her to work for Impossible Foods and why she believes humans are better able to engineer healthier, more sustainable food than animals.

At the break, Impossible Burgers were served while the startups got ready to pitch. As could be expected, there were a number of adorable robots in the showcase, the most compelling of the night was perhaps the desktop robotic kitchen by RoboCuisine, which autonomously prepares “Michelin-quality” meals for small parties, according to co-founders Burges Karkaria and Derick Johnson.

Last month, Grishin’s showcase featured GarbiCan, a smart garbage pail that scans items as they’re thrown away and can reorder them on Amazon and Instacart or arrange for in-store pickup at Walmart, Target, Safeway, Whole Foods and Costco.

Like Disney, Google, Amazon and Apple before them, GarbiCan’s founders Brandon and Brian Bourn are living the dream, working out of their garage. Having moved to San Francisco six years ago, they found a startup ecosystem unlike any other. They met their lead investor, Zach Coelius, on a ski run and he turned out to be the “Unicorn Whisperer,” best known for having the first billion dollar AngelList exit. Their other pre-seed investor is Cruise Director of Autonomous Hardware, Brendan Hermalyn. The brothers landed YC office hours with Adora Cheung, Jared Friedman and Trevor Blackwell with just a google-eyed prototype, and a few Instagram ads led them to their first customers, a local moms group, who are enthusiastically beta testing the product. Life is good, Brandon explained.

“Everyone has been super helpful and very friendly, perhaps because they’re thinking if not this one, maybe next one. The reason why we moved here is because the hustle is unlike anywhere else. Everyone here wants to be successful and they want to help everyone else be successful. My success doesn’t mean you have to fail. There’s a strong ethos here to pay it forward.”

Space startup Momentus provides ‘last mile delivery’ for satellites launched on any rocket
Today’s 5 Best Monthly Dividend Paying Stocks
Salads recalled from Walmart, Aldi, Hy-Vee, Giant Eagle may be linked to growing Cyclospora outbreak
Self-made millionaire: To be happy, young people should aspire to make $70,000 a year, not millions—here’s why
The Stock Market Just Had Its Best Quarter Since 1998