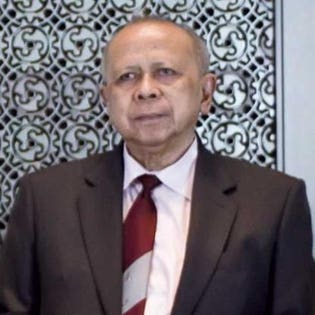 Indonesia lost a longtime member of its business community with the passing of Achmad Hadiat Kismet “Met” Hamami on Friday at the age of 89.

He was the founder of Trakindo Utama, the sole distributor of Caterpillar tractors and heavy equipment in Indonesia since 1971. He was also chairman of Tiara Marga Trakindo (TMT), a holding company established in 2000 with investments in more than 30 companies spanning a variety of sectors that include financing, energy, retail and property.

Over a period of nearly five decades, Hamami overcame considerable hardships while building a business empire that eventually made him a regular fixture on the Indonesia Rich List. His net worth was most recently estimated at $725 million.

Before venturing into business, Hamami had actually started out by joining the military. His first career soared sky high, literally, as a jet pilot in Indonesia’s navy, which included training with the Royal Netherlands Air Force in Europe. Although he rose to become the youngest colonel in Indonesia’s military, before opting for early retirement.

He initially started a tutoring business by giving private math lessons before getting a job with a state investment fund, which brought him into contact with Caterpillar. Eventually, he turned over the reins of TMT to his son Rachmat Mulyana “Muki” Hamami after he lost his sight to glaucoma in 1999.

Hamami was not only passionate about business, though. He also believed strongly in the importance of education for future generations. He started setting up a foundation in 1996 to provide financial support for the schooling of the children of the group’s employees.

His companies also provided educational assistance for public elementary schools in Indonesia through building renovations and teacher training. One of his companies, Trakindo Utama, also pioneered a heavy machinery study program in 10 vocational schools and 5 polytechnical institutes across Indonesia since 1996, which has now been officially adopted as national curriculum.

Hamami, who had maintained a low profile in recent years, is survived by his wife and four children: Anna Solana Hamami, Mivida Hamami, Rachmat Mulyana Hamami and Rahmat Sobari Hamami.

Op-Ed: It’s never too early to save for that emergency
Square emerges as a coronavirus hedge while other payment stocks get crushed
Financial advisors must find their ‘niche’ to survive over next 5 to 10 years
Millionaire Exposes The Jake Paul Financial Freedom Scam
Wells Fargo to pay $3B settlement for violating antifraud rules, resolving fake account probes